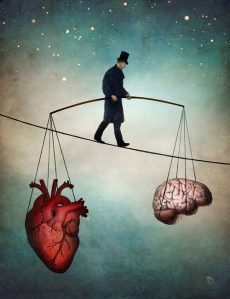 During my higher education, I was fortunate enough to be a student of what seems to be two opposing ends of a spectrum. As an undergraduate at Wake Forest University, I majored in Anthropology and Linguistics, which meant that my professors and mentors looked a bit like Indiana Jones and spent half of the year in the mountains of Nepal, or in Chiapas with the Zapatistas getting arrested by the Mexican government. I learned about Native American linguistic revitalization, shamanistic visions in cave paintings, and cockfighting in Bali. After I graduated, I enrolled in a Masters program at the same university studying Business Management. At first, it felt a bit like the twilight zone (what do you mean most people aren’t anti-capitalist anarchists?). In place of hand-woven skirts and Velcro sandals, my professors were suddenly wearing sweater vests and tweed. In business school, I learned about marketing and market research, economics and finance, everything I’d ever need to become a confident business executive. As a customer insight consultant, I’ve had to grapple with a puzzling question. What was more valuable to my career: Business or Anthropology? Market Research Methods or Balinese cockfighting? While trying not to be too terribly nerdy, let’s explore some lessons Anthropology taught me about market research:

1. Always be a participant-observer. Hortence Powdermaker (I know I’m getting nerdy here–bear with me) called it the paradox of simultaneously being the stranger and friend. It’s essentially the hallmark of a traditional ethnography: the art of (wait for it) observing people by being an active participant in their culture. It plays on basic human nature. You’re much more likely to build rapport among your research participants if they see you as one of their own, or at least trying to get a firsthand understanding of their experience. Now I’m not saying that before I interview a doctor, I sneak into an operating room and try my hand at heart surgery. That would be an unsustainable and disturbingly unethical tactic. But what this means in market research is, if you’re going to conduct a focus group among a key demographic of customers, it might be helpful to try and understand their general experience as people. Commiserate with their frustrations, speak their language. If you don’t think Gastroenterologists have their own special way of communicating, you don’t know Gastroenterologists. As early as possible in the interview or focus group, try to communicate to them, ‘I get you, man.’ That is the quickest way to establish rapport, and the more rapport you get, the better your data.

2. Evaluate the emic and the etic. These are two frames of mind that all Anthropologists must reconcile before entering the field to study something unfamiliar like Balinese cockfighting. It’s also the way you complete the role as participant-observer. I’ll break it down for you: Emic = insider’s perspective, Etic = outsider’s perspective. Complicated, right? All joking aside, yes. It takes years of training to be able to experience both emic and etic simultaneously. It means acknowledging your prejudice while at the same time trying to experience the prejudice of the people you’re studying. It requires an enormous amount of self-awareness and empathy. In Anthropology, this means wholeheartedly embracing cultural relativism while you’re in the field. In market research, it usually means stopping yourself before you say that an interview is a waste of time because the participant is just not cooperative, or just doesn’t understand your questions. It means removing the word “weird” from your vocabulary. Because sometimes the problem isn’t your participant, it’s just the way you’re approaching him.

3. Make your analysis as holistic as possible. There are 24 hours in a day. Chances are, your participants are spending some of those hours not thinking about your product. They have lives, families, hobbies. Maybe they enjoy fishing or Balinese cockfighting. This doesn’t mean you need to know your participants’ life stories, but perhaps it’s time to think outside the box a little when it comes to demographics. If you open the door to allow participants to divulge a little about themselves, you might discover something surprising. Like how body image plays a role in the brand of ketchup someone chooses, or how powerful ethnolinguistic accents are in clothing advertising.

4. The scientifically non-scientific? Anthropologists are the paradigm pioneers! Okay, I’ll reel in the nerd, sorry. But it’s true. Anthropology has a dark history of supporting the atrocities of colonialism, but it has come a long way. That’s because anthropologists are always searching for the truth about humanity and what it means to study ourselves. It’s a big question, yes, and it may be difficult to translate such an existential idea to market research, but the fact is that these paradigm shifts have dictated the direction of qualitative research methods. Ethnographies are catching on in market research because the constant self-criticism of Anthropology created a methodology that gives you an unprecedented depth in data. Innovation comes only in recognizing the limits of the status quo, and in that way, maybe we can take some cues from our Velcro sandal-wearing friends.

5. People are just awesome. ‘Nuff said. So there you have it. By no means do I want to disparage my excellent education at the Schools of Business, but when it comes down to it, I’ve learned more about market research (and life, for that matter) from Anthropology. So next time you’re looking for a good business book, pick up Margaret Mead or Clifford Geertz. You may be surprised at what you learn.

Enter your name and the author will reach out to you.

This form will dynamically email the author of a blog post.