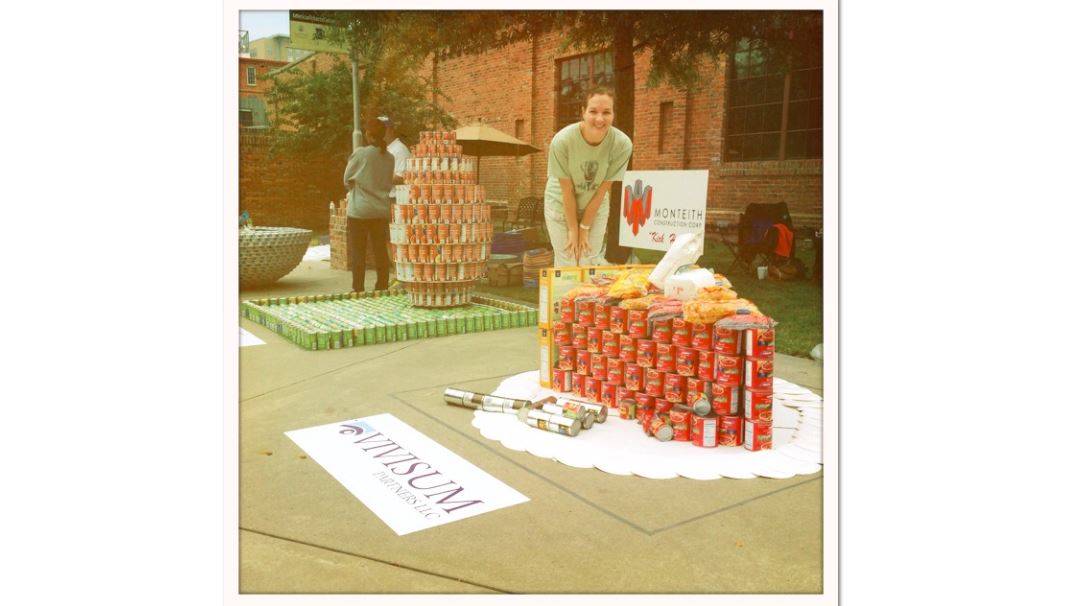 To be perfectly honest, I never thought it was possible to be quite so stressed out about a giant pie sculpture made from diced tomatoes and egg noodles. The amount of time (and trunk space) that it took to design the sculpture, make calculations, order countless large cans of tomatoes, several dozen bags of noodles, and more boxes of corn flakes that I could carry, made me think I was the stage designer for some Broadway production. And here’s the thing: our sculpture didn’t even approach the complexity and ingenuity of some of the others. Walking around the American Tobacco Campus, the afternoon sky above cruelly threatening a downpour, it was difficult not to marvel at some of the creations being built: a bull’s head made entirely of whole grain pasta; a (totally meta) food truck made from boxes of cereal; a replica of the Bodie Island Lighthouse in the Outerbanks, with the sand below made entirely from bags of white beans and rice, with a pasta plane seemingly suspended in midair. But what was more inspiring than all of the creativity around us was what WUNC’s Frank Stasio (I was so starstruck) pointed out on the stage in his introductory message: that they expected to raise over 17,000 pounds of food that year for the Food Bank. Sure, it was difficult not to feel a little competitive when we first arrived with our pie ingredients, completely intimidated by what other seasoned teams were building. But once I took a half a second to think about it, this was a truly wonderful thing: people from all over the community, from all kinds of different companies, organizations, and schools, coming together to build hope for the fight against hunger in the Triangle. So, I wanted to use this week’s post to thank MHAworks for organizing the 2013 Creative Food Drive, as well as all of the teams that participated. You may have won this round, awesome pasta bull, but we’ll get you next year! To view photos and see more information on the Creative Food Drive, visit their website.

We would love to hear from you. Send us your contact information and we will be in touch soon.